Flanders Moss is a remarkable survivor. It’s a remnant of the huge Forth Valley boglands that once stretched from Aberfoyle to beyond Stirling.

This ancient gem now forms the largest intact raised bog left in Britain, home to many scarce plants, birds and insects. And within its treasure chest of peat lies evidence for thousands of years of change in landscape, wildlife and human culture.

West Moss-side is actively participating in the conservation management of this precious habitat. When we bought the farm land including the moss in 1998 our farm management plan focussed on biodiversity and organic farming. In the early years we helped start the active management of the birch scrub which slowly takes over as the bog dries. Twice a year we had conservation volunteer work parties – we aimed to clear about an acre a year with chain saws and chippers and physical pulling of the birch off the bog. this was important because we did not want the birch to rot on site and so enrich the acid bog peat.

Drowned domes
Raised bogs like Flanders Moss are so called because they grow above the surrounding landscape but have never been common. Most were wiped from the map by drainage, cutting and the expansion of farming. They form immense domes of peat, with a living skin of plants. Amazingly, water can form up to 98 per cent of the bog! These domes began to form thousands of years ago, after the last Ice Age, in lowland hollows that once held lake plantlife.

Sphagnum mosses power the upward growth of a raised bog, slowly adding layer upon layer and forming the bulk of the plant material in the peat. Several sphagnum species grow on Flanders Moss, creating a colourful patchwork of emerald, amber, tawny and claret. These mosses soak up water like a sponge and grow upwards from their tips, leaving the lower, shaded parts to die. Gradually, this material forms peat, adding less than a needle-width 1mm a year to the bog height. That’s enough though, as over thousands of years, this has piled peat over seven metres deep on Flanders.

Raised bogs form when they no longer rely on incoming groundwater and are fed purely by rainwater. Flanders Moss reached that lofty position thousands of years ago, and its rare size and quality have led to it being nominated as one of the European Union’s ‘Special Areas of Conservation’. 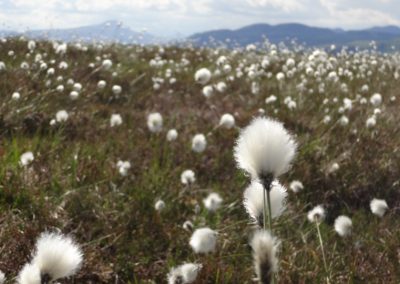 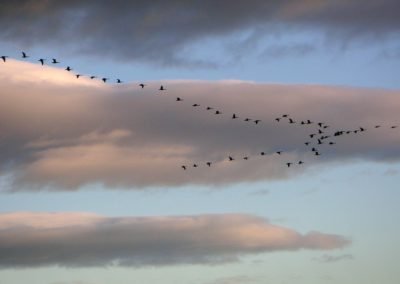 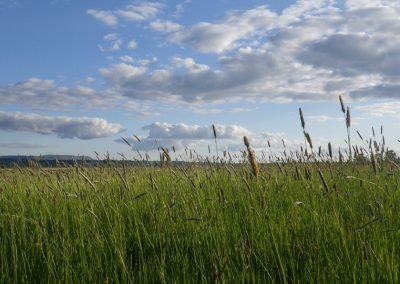 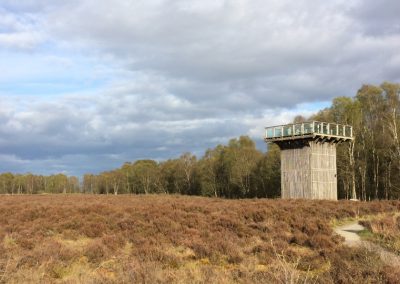 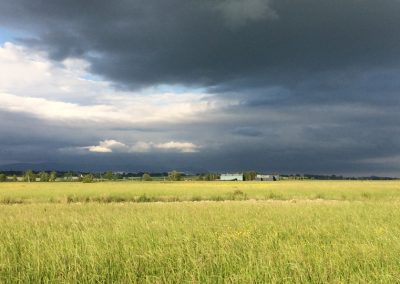 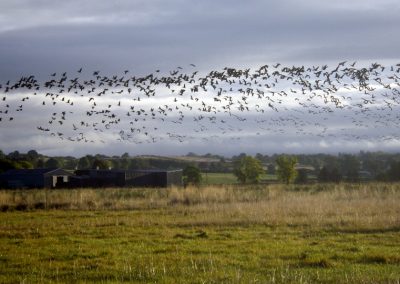 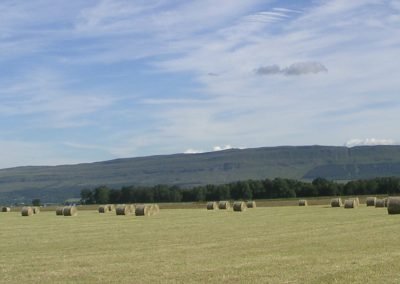 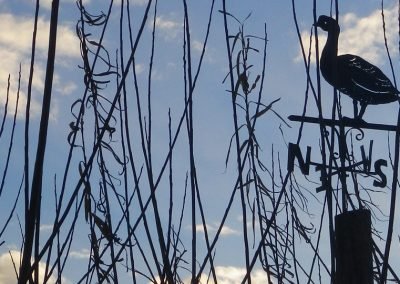 In cold storage
Evidence of huge changes in the land and water of the Forth Valley and its surroundings is preserved in the Moss’s layers of peat. More than 11,000 years ago, the Menteith Glacier dumped ridges and mounds of sand, gravel and clay as it melted here. The sea level then rose, and about 9,600 years ago fell again, stranding a beach that the bog later smothered.

Some 8,500 years ago, the sea returned in force. It almost cut the country in two, leaving only an eight kilometre wide neck of land linking northern and southern Scotland. Buried seashells and the clay-rich Carse deposits of the valley provide evidence of that time. Then an enormous underwater landslide from off Norway’s coast propelled a huge tidal wave or ‘tsunami’ across the North Sea to Scotland. When it hit the Forth Valley, the wave was still up to 15 metres high. Fine sand within the peat marks the fall-out from this 7000-year-old North Sea collision.

Digging up the past
Ancient remains such as a Bronze Age bucket, swords and Britain?s oldest wheel show that this part of the Forth Valley has been used by people for thousands of years. But one of the biggest human impacts on Flanders Moss came in the 18th and 19th centuries, through the work of agricultural ‘improvers’. Henry Home, or Lord Kames, was one such man.

When his wife inherited her brother’s Blairdrummond Estate, Kames looked at the Kincardine Moss, just west of Stirling, and saw potential farmland in the clay-rich layers beneath the peat. In the mid-1760s, he began to turn this vision into reality by renting out eight acre portions of the bog on long leases. This was the start of a massive project – greatly expanded after Lord Kames’ death by his son, George Home Drummond – which continued until 1840.

Most of Home Drummond’s tenants were families evicted from Balquhidder and Glen Lyon in the notorious Highland Clearances. These Gaelic-speaking newcomers were mockingly called ‘The Moss Lairds’ by local people. They cut the walls for their homes out of the Moss, and topped them with a roof of timbers and turf. By 1811 some 764 men, women and children, plus their livestock, were living on the Moss. Bit by bit, the moss dwellers dug away the deep peat, throwing sods of it into specially cut channels. Water then washed the peat downriver, where it still forms a layer in the Forth Estuary . Hundreds of hectares of the Moss were changed to farmland, and others who followed Home Drummond’s example cleared the bogs from thousands more hectares in the Carse of Stirling.

Natural survivors
Adders and mountain hares are two of the larger creatures that thrive on the bog year-round, while thousands of migrant pink-footed geese from Iceland and the Arctic roost on the Moss lochan over winter. Look out too for the hen harriers that hunt here in winter.

For flowering plants, the all-swamping moss and high water levels can make life tricky here at any season. Cranberries and bog rosemary are among a fairly small bunch of plants found on raised bogs. Tough, fast-growing shoots help them to avoid being totally swamped by the growth of saturated moss around them.

Bog Myrtle’s another resident and some say its strong smell clears hangovers. This could have been useful a couple of hundred years ago when whisky was distilled locally at Kippen and Thornhill. Its leaves are an important food for caterpillars of the Rannoch brindled beauty, an uncommon moth that survives on the Moss.

Other notable wildlife includes a rare species of jumping spider that leaps on its prey; flesh-eating sundews that use sticky hairs to trap small insects on their leaves; a host of weird and wonderful dragonflies; and hundreds of large heath butterflies that appear in mid-summer to feed on the fluffy, white flowered cotton grasses.

Read about the latest Flanders Moss project from the Carse of Stirling Partnership: